This crostini bread recipe pairs perfectly with your favorite toppings. You can serve this to your hungry family as a fun weekend lunch, or you could make a large batch for your next party or get together. Either way, you’ll love this simple, Italian appetizer. 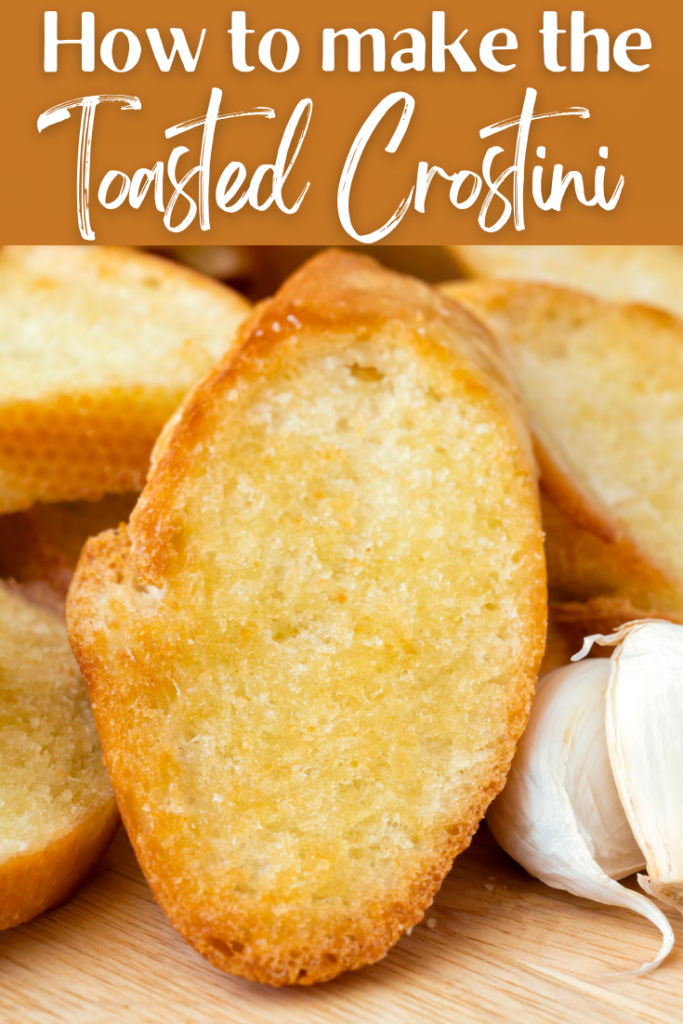 Crostini is an appetizer that comes from Italy. In Italian, it means “small toasts".

Crostini are slices of thin toasted bread that you typically brush with a little bit of olive oil. Traditionally, people serve them with savory toppings like cheese, anchovies, olives, and other options. Sometimes people serve them simply with olive oil or a dipping sauce.

These bread appetizers are similar, but they have some distinct differences.

In Italian, bruschetta comes from the word “bruscare,” which means “to roast over coals.” When you make bruschetta, you typically use rustic Italian bread or sourdough.

The Difference Between Crostini and Bruschetta

When you make crostini, you typically use a smaller, rounder white bread, like a baguette.

Both can include any toppings you’d like, though most people top bruschetta with a combination of olive oil, tomatoes, vinaigrette, and garlic.

Our crostini recipe is super easy to make, and we give you instructions on how to do it in both the oven and the air fryer.

By making the toast in the air fryer, you can free up your oven to cook bake other treats. It also makes a lot less heat, which means you can make the crostinis anytime of year, even when it is really hot. 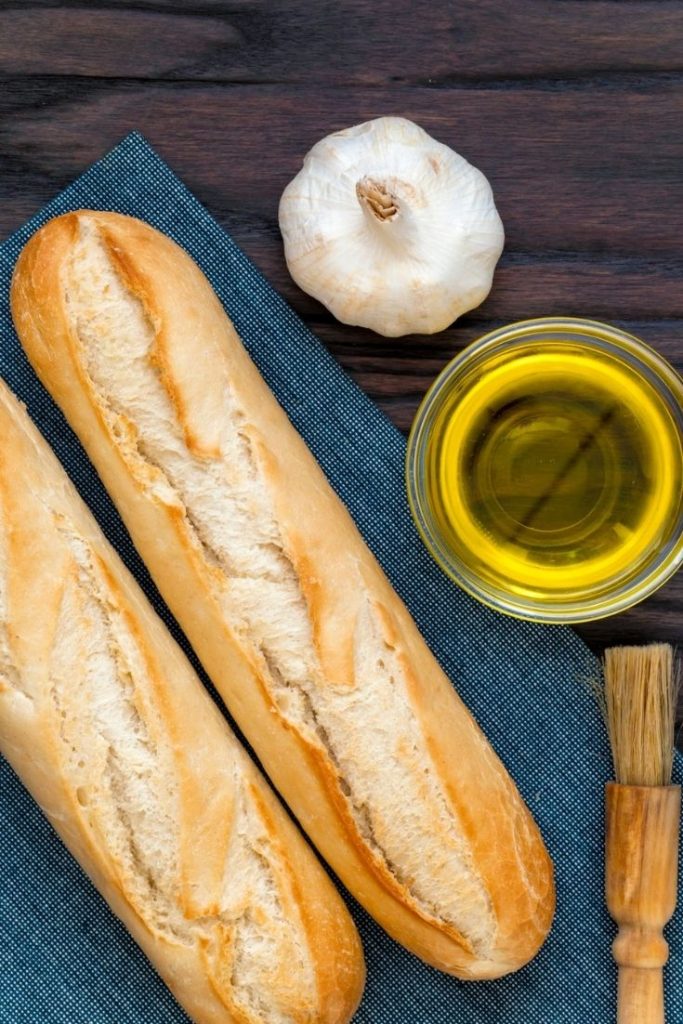 You only need a few ingredients to get started. Of course, if you want to make homemade toppings, spreads, or dips, you’ll need ingredients for those too. Here’s what you need for the basic recipe: 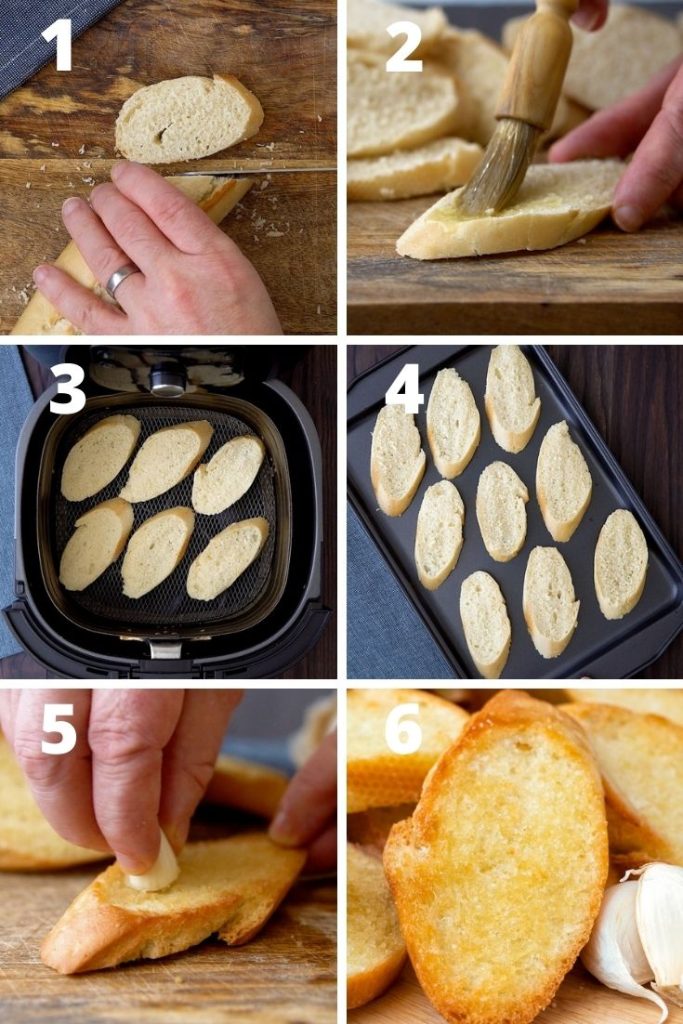 How To Make Crostini

Best Bread to Use for Crostini

Traditionally, crostinis use thin French baguettes to create small round shapes. Though traditional recipes use bread with a white flour, you could use sour dough, whole wheat, or whole grain bread varieties if you prefer so long as they are shaped into a baguette.

And yes, you can use other varieties of bread if you like, but you will technically no longer be making crostini.

Fresh or Stale Bread for Crostini?

We use bakery fresh, crusty bread when we make crostini. However, you can use day or two old bread that is a bit stale. When you toast the bread slices in the oven or air fryer, you won’t be able to tell the bread was not fresh. 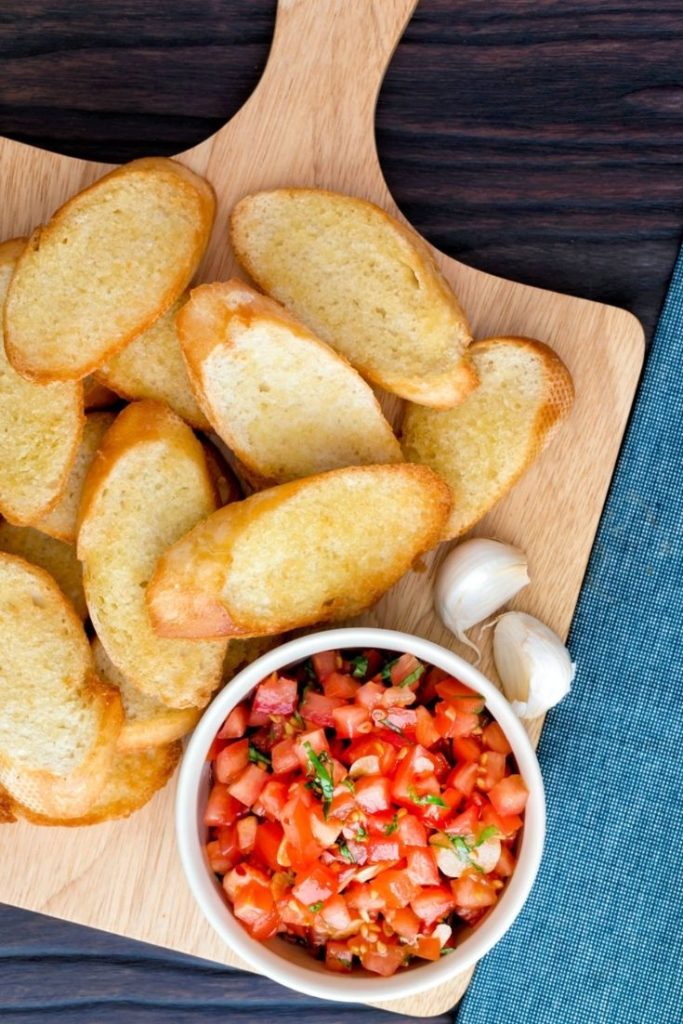 When you make crostini, here are a few topping suggestions to get you started: 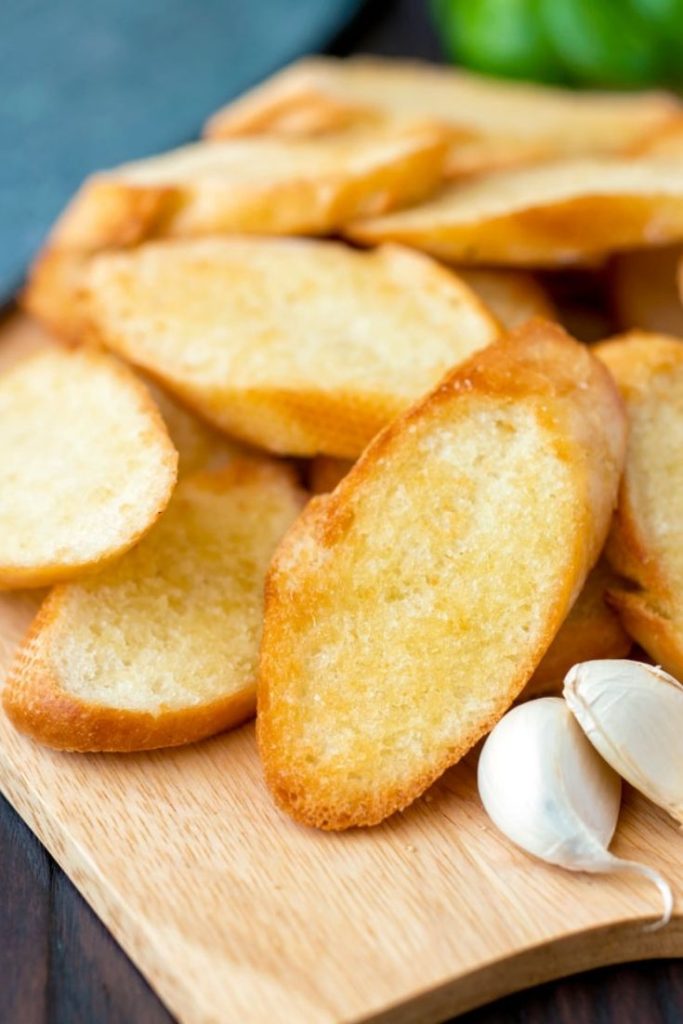 How Do You Eat Crostini?

Crostini is typically served as an appetizer. It goes great with other finger food appetizers, which makes it a great dish to serve at a party or other get together. Here are some other recipes you can serve when you are ready to make crostini:

Are Crostini Served Hot or Cold?

In most cases, you allow the bread to cool before placing toppings on top and serving. Beyond that, you can serve both hot or cold food on top of the toast slices. It really comes down to a matter of taste and what you are in the mood for. 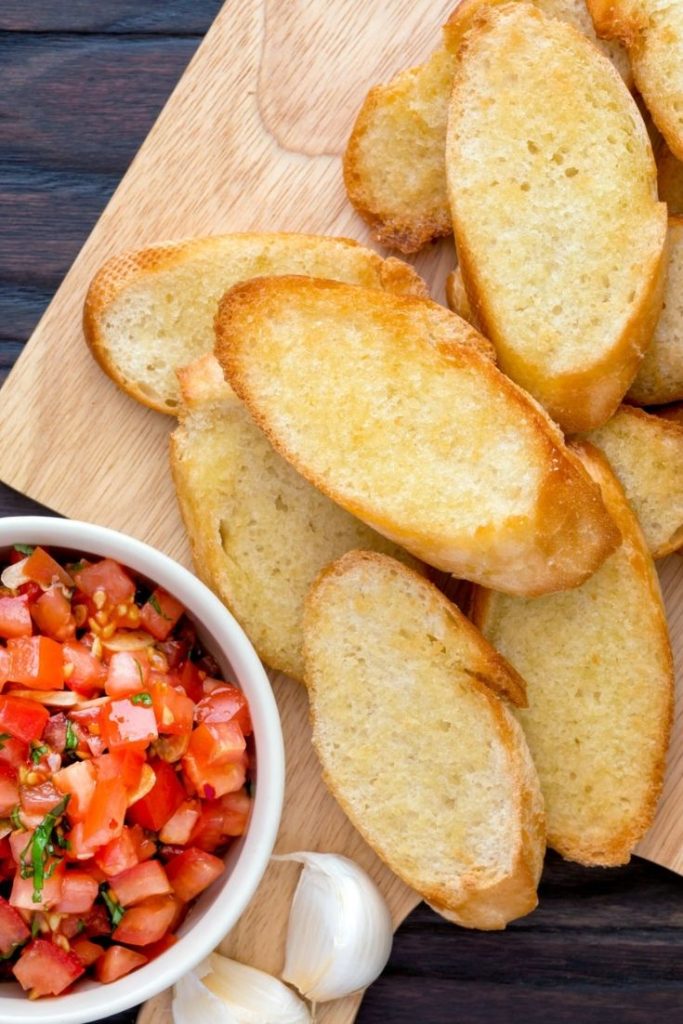 Can this Crostini Recipe be Made Ahead?

While you can toast the bread a day or two ahead, we recommend making them relatively soon before you are ready to serve them. They generally taste better and won’t have a chance to go stale.

If you make them ahead, make sure you store them properly in an air tight container.

You can store them in an airtight container. To store, allow the toast to cool completely and then place the toast slices into the container and seal it tightly. You may want to place them back in the oven for a few minutes to give them a bit more crispiness.

To freeze, follow similar steps and then place in your freezer for up to 6 months. You can reheat them by placing them in the oven and heating until they are thawed and crisp again. 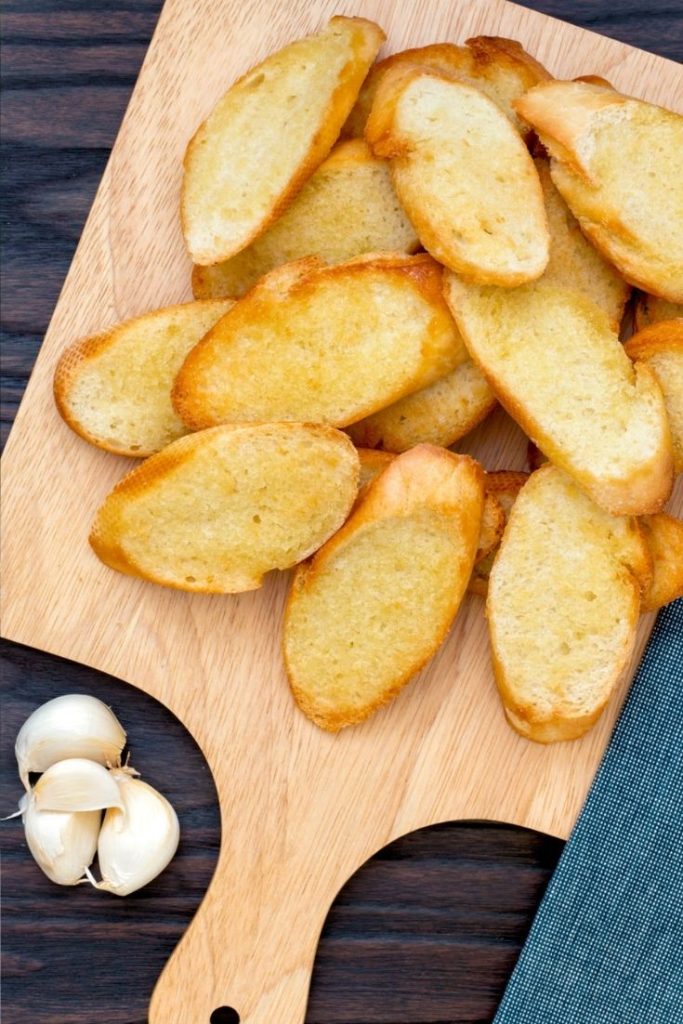 Here are the answers to some frequently asked questions that you might find helpful when making this recipe.

Is crostini French or Italian?

Crostini is an Italian appetizer that uses a baguette. You slice and then toast the baguette before topping it with savory or sweet toppings.

What bread is crostini made from?

Crostini normally features a baguette that uses white flour. You could use other types of baguettes, but if you use a different style of bread, you are technically going to be making bruschetta.

Is crostini supposed to be hard?

The outside of the toasted slices should be a golden brown. Depending on how thick and fresh your bread is when you start, the inside of the bread may have a bit of softness to it. Thinner slices and staler slices will be a bit harder.

Can you grill crostini?

Yes, you can grill crostini by placing them on your grill set to medium heat. You’ll need to toast each side for about 1 to 2 minutes or until charred lines appear and the bread starts to turn golden brown. Once ready, you’ll need to flip the bread and cook the other side the same way.

Let us know what you think

If you make this delicious recipe, let us know how it went! When you make this, be sure to take a pic and tag us on Instagram @dbellyrulesdmind or Facebook @thebellyrulesthemind!

All information and tools presented and written within this site are intended for informational purposes only. We are not a certified nutritionist and any nutritional information on TheBellyRulesTheMind.net should only be used as a general guideline. This information is provided as a courtesy and there is no guarantee that the information will be completely accurate. Even though we try to provide accurate nutritional information to the best of our ability, these figures should still be considered estimates.