Instant Pot corn on the cob is a delicious side dish that cooks up in about 2 minutes. Save yourself the time it takes to boil it with this quick recipe.This easy side dish needs only a few ingredients and pairs well with almost any meal. Video Recipe. Stove Top recipe included. Can be made Vegan. 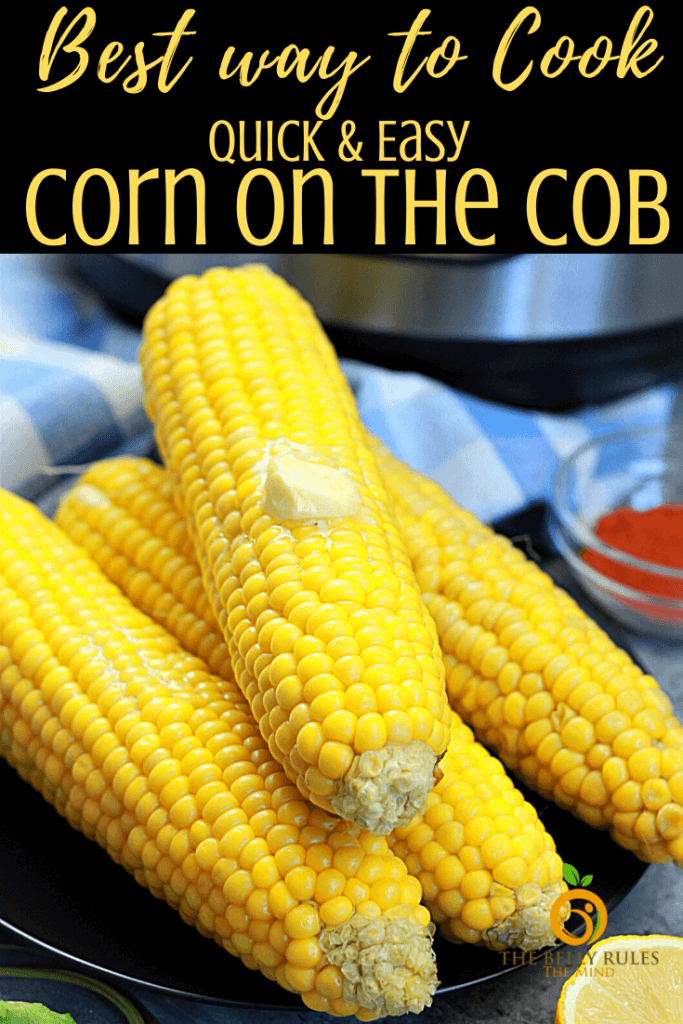 What is corn on the cob?

Corn on the cob is corn that is still attached to its cob when it is cooked. It comes in three main varieties in the United States: white, yellow, and mixed. Back home in Mumbai, it's everyone's monsoon favorite.

It is popular to serve at barbecues during the summer. It is also a common treat found at fairs and other gatherings.

You can eat corn on the cob as is. Or you can add spices and other flavorings to enhance the flavors. 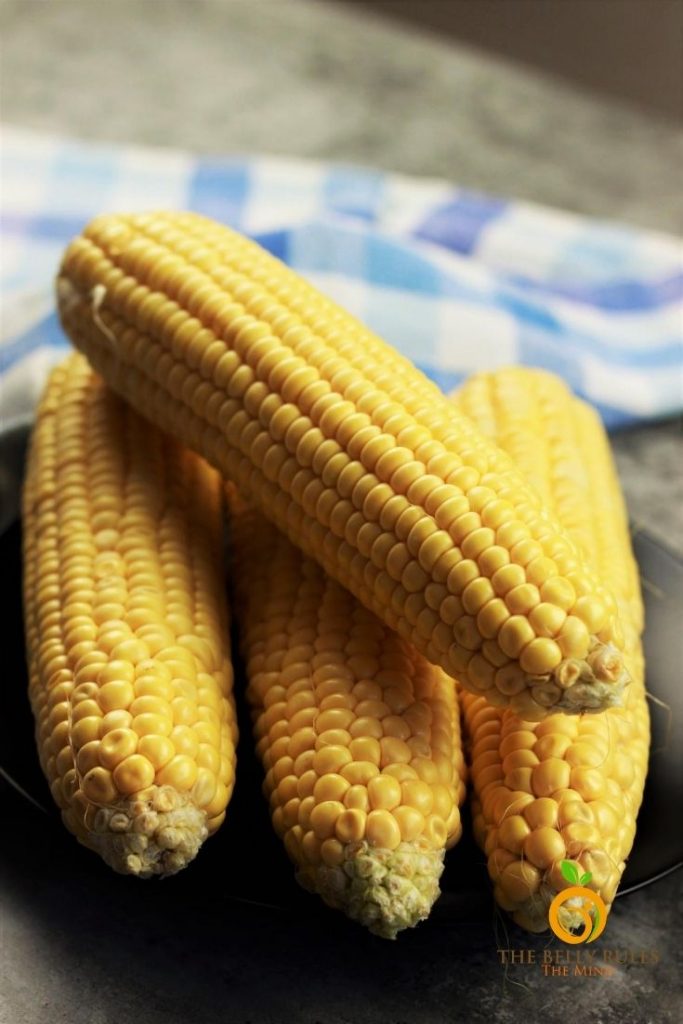 How to buy corn on the cob

Corn on the cob can be found at most grocery stores year round. You should look for husks that are mostly green and feel firm to the touch. Graying or browning husks often mean the corn is no longer fresh.

It tastes best fresh. If you can, try to get it at a local farm stand that recently picked the corn.

Avoid buying pre-husked corn on the cob. The only exception is if you buy frozen corn. They come pre shucked.

Tips to make the perfect corn on the cob

Here’s how you can make sure it tastes great every time: 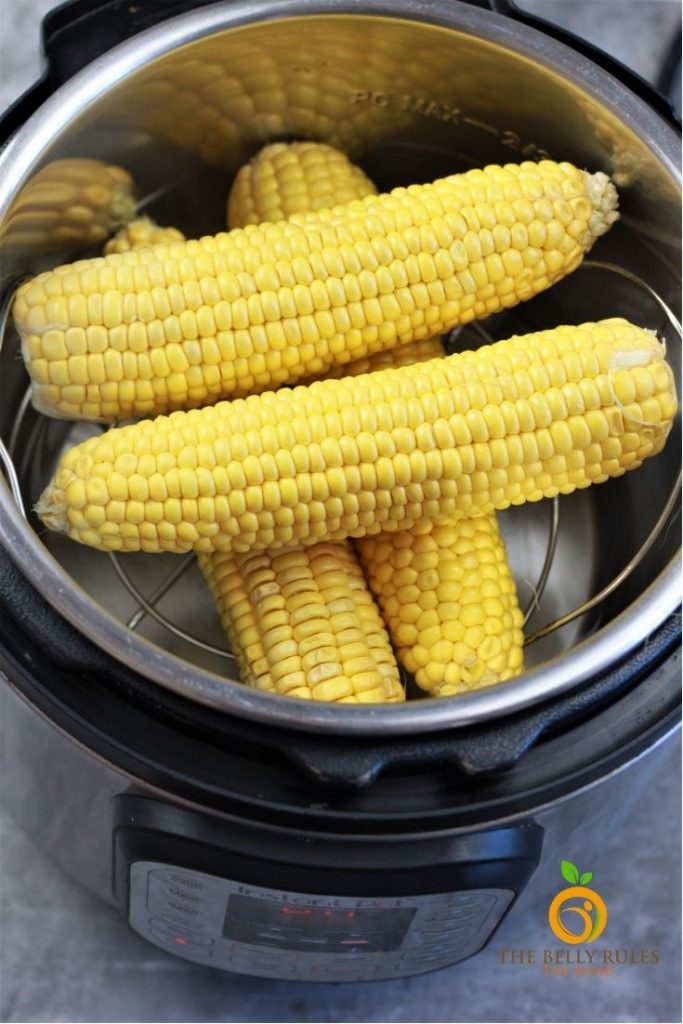 Start by husking the corn and removing the silk strings. When the corn is ready, place the trivet in the inner pot.

Pour the water into the inner pot and then stack the corn on the trivet.

Close the lid to the Instant Pot and set the vent to Sealing. Set the Instant Pot to cook on high pressure for 2 minutes. When the timer goes off, do a quick release of the pressure.

Carefully remove the lid to the Instant Pot. Use tongs to remove the corn. Slather the corn with butter , sprinkle with salt and your favorite seasonings. 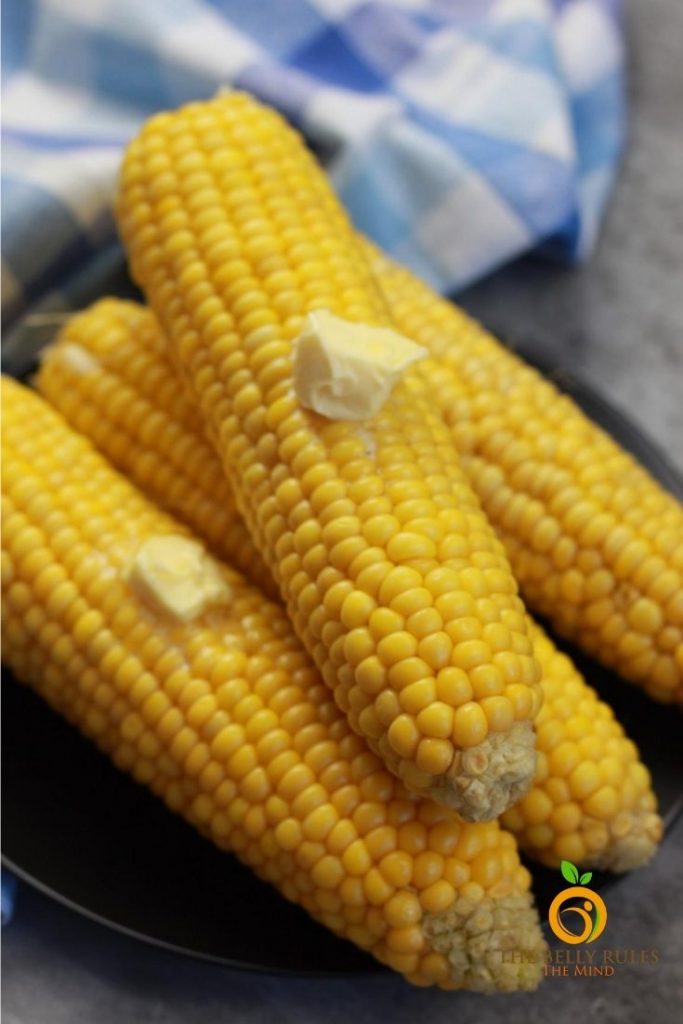 How to boil corn on the cob on a  stove top

To make boiled corn on the cob, follow these instructions:

Start by peeling and removing the silk strings from the corn.

Fill a large stock pot about ¾ full with water. Bring the water to a boil and then carefully add the corn. Tongs make it easy to add the corn!

Once the corn is added, cover the pot and return the pot to a boil. Boil the corn for about 10 minutes or until the corn has started to become tender.

Once the corn has cooked, carefully drain the water. Place the corn on a plate and add butter and salt to the corn. 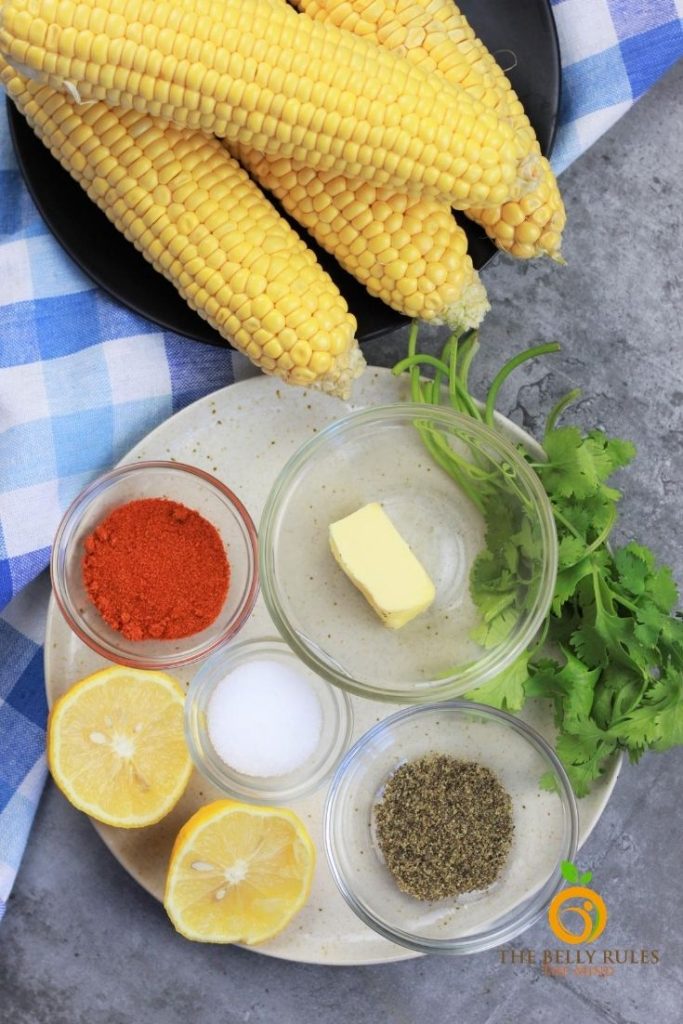 Corn on the Cob seasonings

A popular seasoning combination for corn on the cob is butter and salt. The salt helps bring out the sweetness of the corn and the butter adds a rich taste to the corn.

But you can add other creative spices and seasonings. You can use butter to help the seasonings stick to the corn, but you don’t have to. The steam and condensation will help seasonings stick with or without butter.

You can add just about any seasoning you want like: 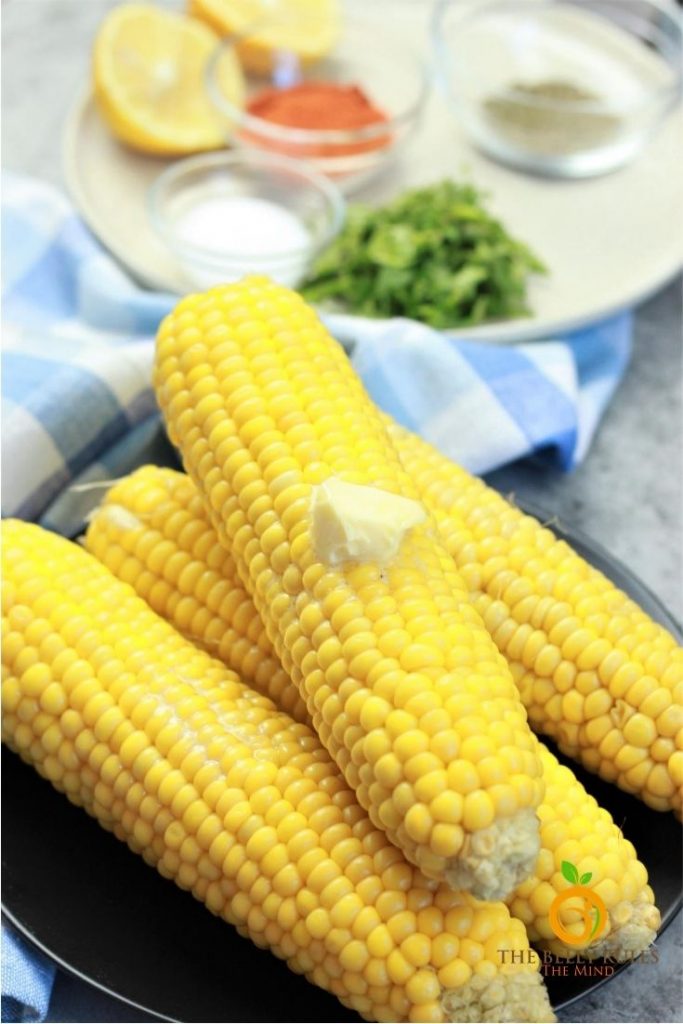 How to store corn on the cob?

Can you cook corn on the cob with husks?

Yes, but not in the Instant Pot or in water.

To cook corn on the cob with the husks on, preheat your oven to 400 degrees F. As the oven heats, remove any loose leaves from the husk but leave it fully intact.

Place the corn on a middle rack in the oven. Cook the corn for 15 minutes and carefully remove from the oven. Allow it to sit on the counter for about 5 minutes before peeling the corn.

Carefully peel the corn and be careful for rising steam from the corn. Once the corn is peeled, add butter, salt, or other flavorings. 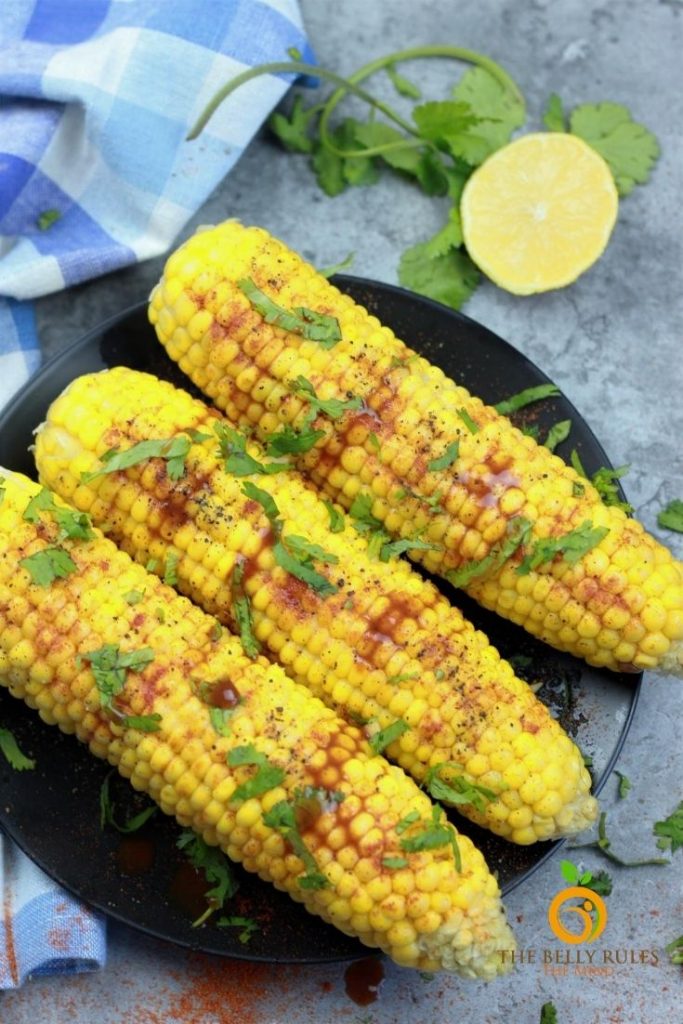 Corn on the cob pairs well with barbecue foods or when you want to relish a quick warm snack on a rainy day. But you can serve it with a lot of different main dishes because it has a relatively neutral flavor.

You could also use corn on the cob to make our Black Bean and Corn Salad. Just remove the corn from the cob to add to the recipe.

Can I use frozen corn on the cob?

How can I make corn on the cob for a crowd

If you have a large crowd of people coming over, you can cook some of the corn in the Instant Pot or pressure cooker and some in large pots on the stove. You can also cook the corn in batches and keep the corn warm while the rest cooks.

How can I keep corn on the cob warm after cooking?

You can keep the corn warm by placing it in an insulated container or cooler. When the corn is inside, place aluminum foil overtop and tuck in the edges. Finally, add a layer of towels and close the lid. This should keep the corn warm while either transporting it or making batches of corn. 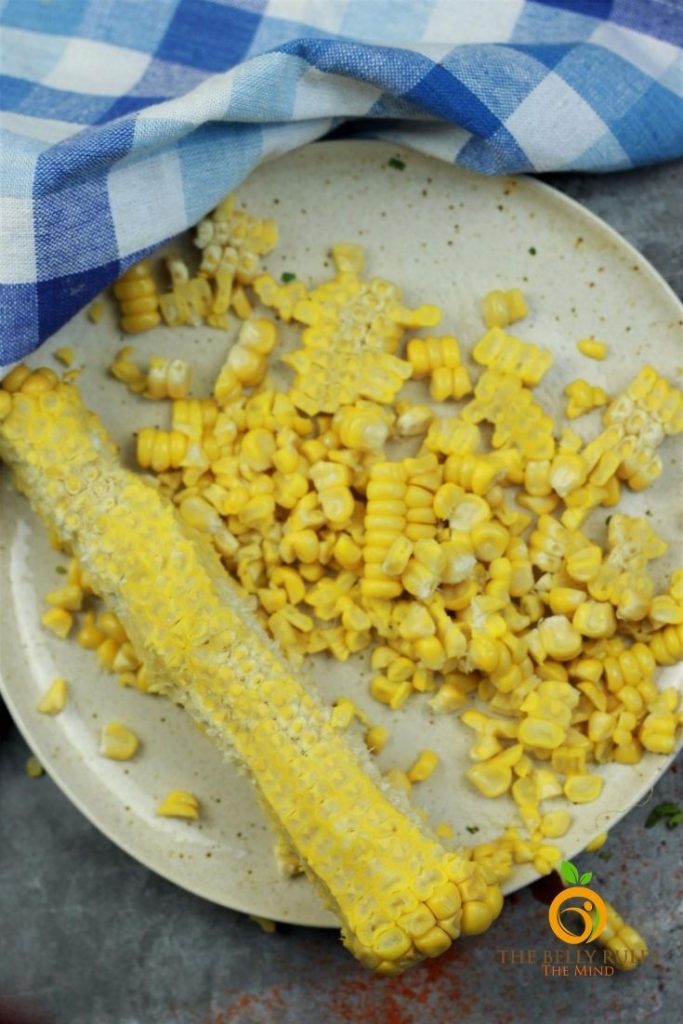 How to use leftover cooked corn on the cob?

You can reheat corn on the cob in the microwave. To do this, wrap it in plastic wrap and cook for about 1 minute to heat it through.

You could also use cooked corn in recipes that call for corn. Our delicious Instant Pot Mexican Three Bean Salad uses corn. Or you could add to our spicy Mexican Fiesta Rice.

Did you make pressure cooker corn on the cob? Take a picture of it and tag us on Instagram @dbellyrulesdmind.

Remove the corn husks and silks.

Place a trivet in the inner pot of the Instant Pot.

Stack the corn ears on the trivet.

Close the lid, seal the vent and pressure cook and Pressure Cook on high for 2 minutes followed by quickly releasing the pressure.

Once the cooking cycle is finished and the pin drops, carefully open the lid and remove the corn.

Slather with butter, salt and lemon juice or dress it up with your favorite seasonings like I did using pepper and paprika.

How to boil Corn on the Cob

Peeling and remove the silk strings from the corn.

Use a large stock pot and fill it 3/4th with water. Boil the water and then carefully add the corn using tongs.

Cover the pot and return the pot to a boil. Boil the corn for about 10 minutes or until the corn has started to become tender.

Once the corn has cooked, carefully drain the water. Place the corn on a plate and add butter, salt and your favorite seasoning to the corn.

I cook mine in the husk all the time. I trim off the ends first. If large I cook for 4 minutes,