This is the best Tandoori Paneer Tikka you’ll ever make at home! Same restaurant style taste, but making them our Air Fryer !  These spiced, marinated paneer cheese skewers are flavor packed treat you’ll love as a snack or for  upcoming Super bowl or any get-togethers. A delicious vegetarian appetizer perfect for entertaining. 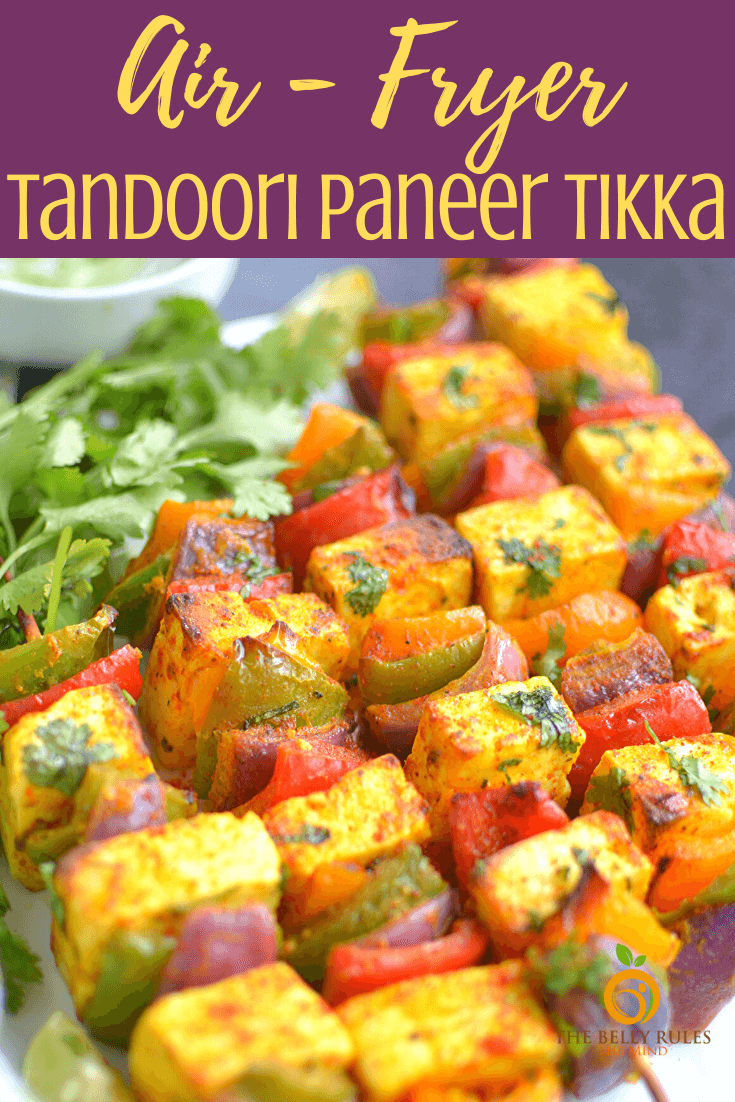 Tandoori paneer tikka is a popular dish made from vegetables and a soft Indian cheese, paneer. The cheese is cut into cubes and marinated in a delectable blend of spices and yogurt. Then you put the marinated cheese and vegetables onto wooden skewers. 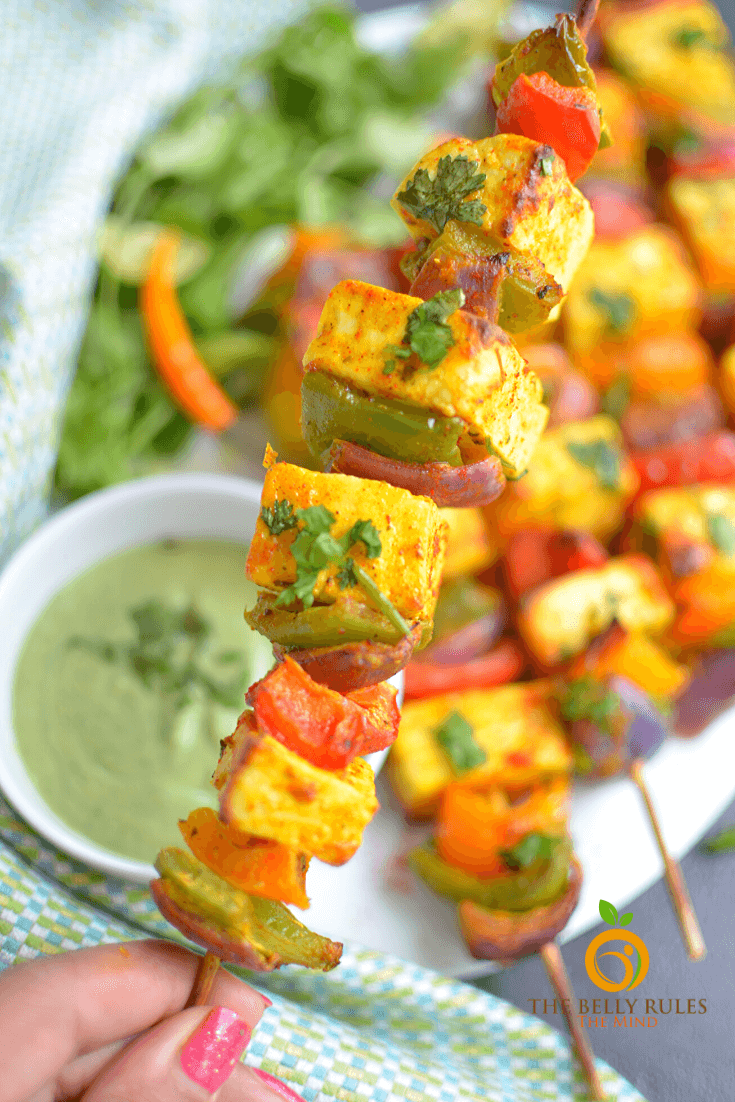 WHY SHOULD I MAKE TANDOORI PANEER IN THE AIR FRYER

Most people likely don’t have a traditional tandoor at home to make tandoori paneer or might not feel like fussing with a more labor intensive cooking method. An air fryer provides you a quick, easy method for making dishes like tandoori paneer. Plus, air frying food is a healthier alternative if you are looking for that scrumptious fried food taste with less fat and calories.

Not convinced an air fryer is for you yet? Air frying cooking also involves less mess - you don’t have to figure out what to do with the cooking oil once you are done with it. You won’t have to deal with nasty oil splatters, Air-fryer paneer is faster than traditional methods of cooking tandoori paneer.

While you save tons of time cooking this, you don’t sacrifice any flavor by making tandoori paneer tikka in the air fryer. You’ll still get that beautifully charred paneer that is oh so delicious.

If you love using your air fryer, you should check out some of our other great snack options Apple chips   and banana chips ! 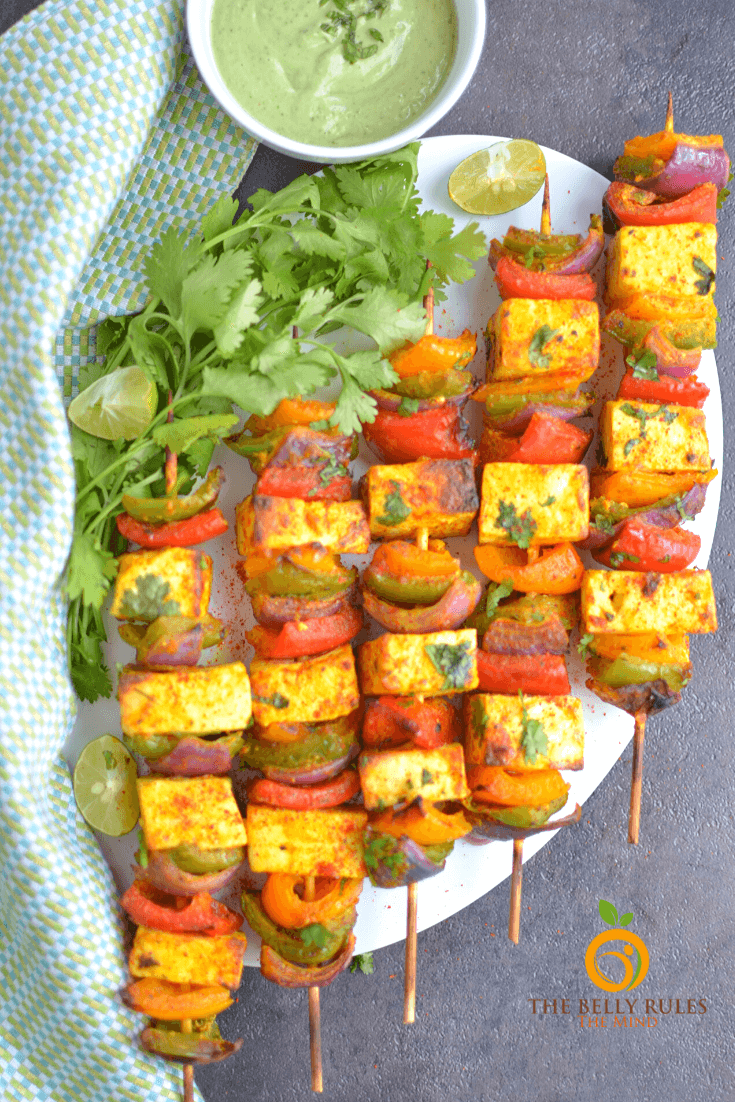 HOW IS TANDOORI PANEER TIKKA DIFFERENT THAN TIKKA MASALA?

If you are new to Indian cuisine, you might be confused by the difference in tandoori paneer tikka and paneer tikka masala. Tandoori paneer is soft Indian paneer cheese served on skewers or kabobs. Before you cook the paneer, you marinade it in a blend of spices and yogurt. Then you skewer it with chopped vegetables and cook it at a high heat.

Paneer tikka masala is also a dish based on marinated paneer. However, instead of skewering the paneer, the cheese is served in a delicious creamy curry sauce. If you are interested in making tikka masala, check out my flavor packed recipe for Tikka Masala Curry 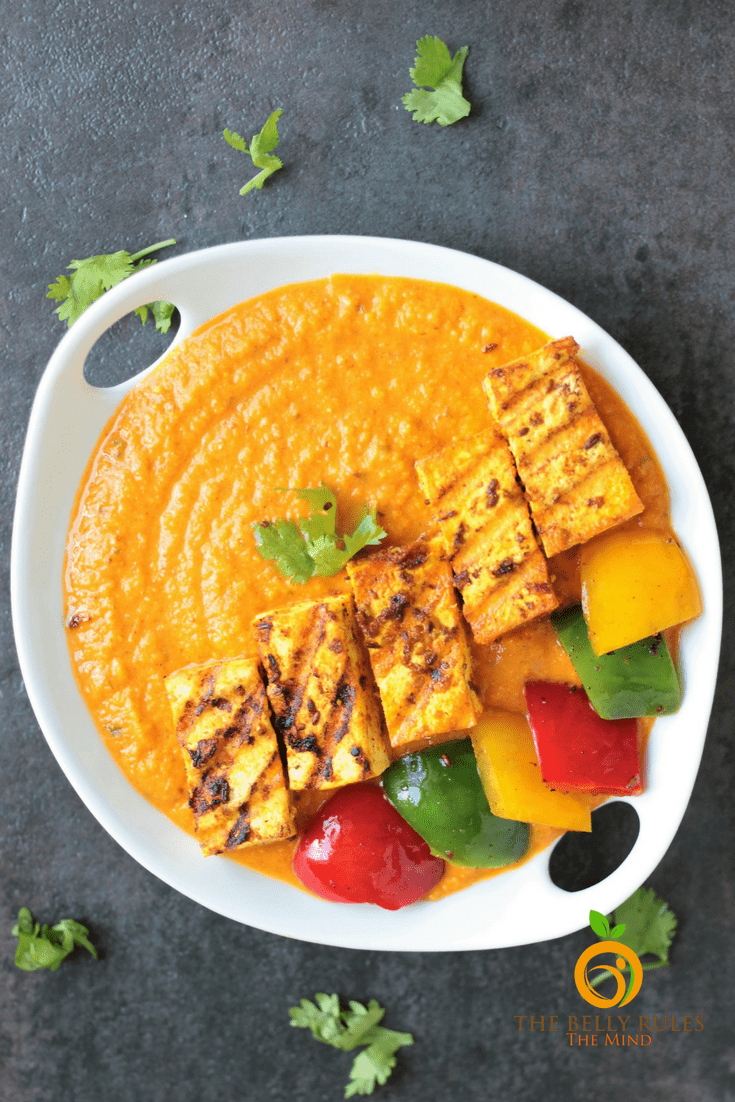 HOW DO I MAKE MARINADE FOR TANDOORI PANEER TIKKA

To make the marinade for tandoori paneer tikka, you need a few ingredients. You will need:

Add all the ingredients into a bowl and whisk them together until they are smooth and combined. Then you can add the cut pieces of paneer. You’ll want to toss the paneer pieces in the marinade until the paneer is evenly and well coated. Then cover the bowl and set it aside. 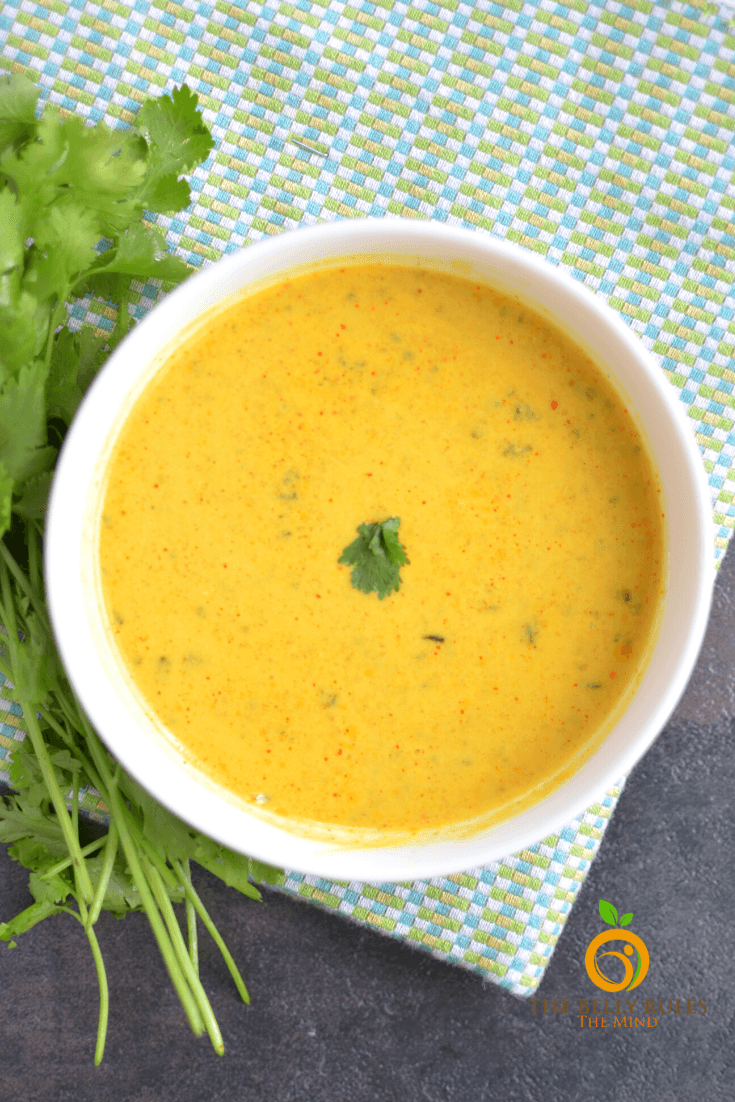 HOW LONG DO I MARINADE TANDOOR PANEER?

At minimum, you should marinade the tandoori paneer for 30 minutes. This lets the paneer absorb some of the flavors.But I recommend you let it marinade for a longer period of time. When I make tandoori paneer, I marinade it for about 2 hours. But if you are in a hurry, you can shorten the time to fit your needs. Just make sure you have at least a half hour to marinade it first.

We love our Mealthy Crisp Lid, it's great to make our cheat meals ' healthier'. It's an electric pressure cooker attachment which makes your electric pressure into an airfryer, crisps food and even dehydrates food. Most of us already have an electric pressure cooker, so if you are short on counter space like us in Germany, then this is a great option to have instead of purchasing another gadget to keep on the counter top.  We have tested it with many recipes and love the results. If you don't have a crisp lid already you can get it here. If you do have a Crisp Lid, let's get started.

To make tandoori paneer in an airfryer, follow all the steps to create the kabobs, making sure you marinade them for at least 30 minutes. Place the marinaded kabobs in your airfryer leaving just a little bit of room between each kabob for the air to pass through. This allows them to cook them evenly. 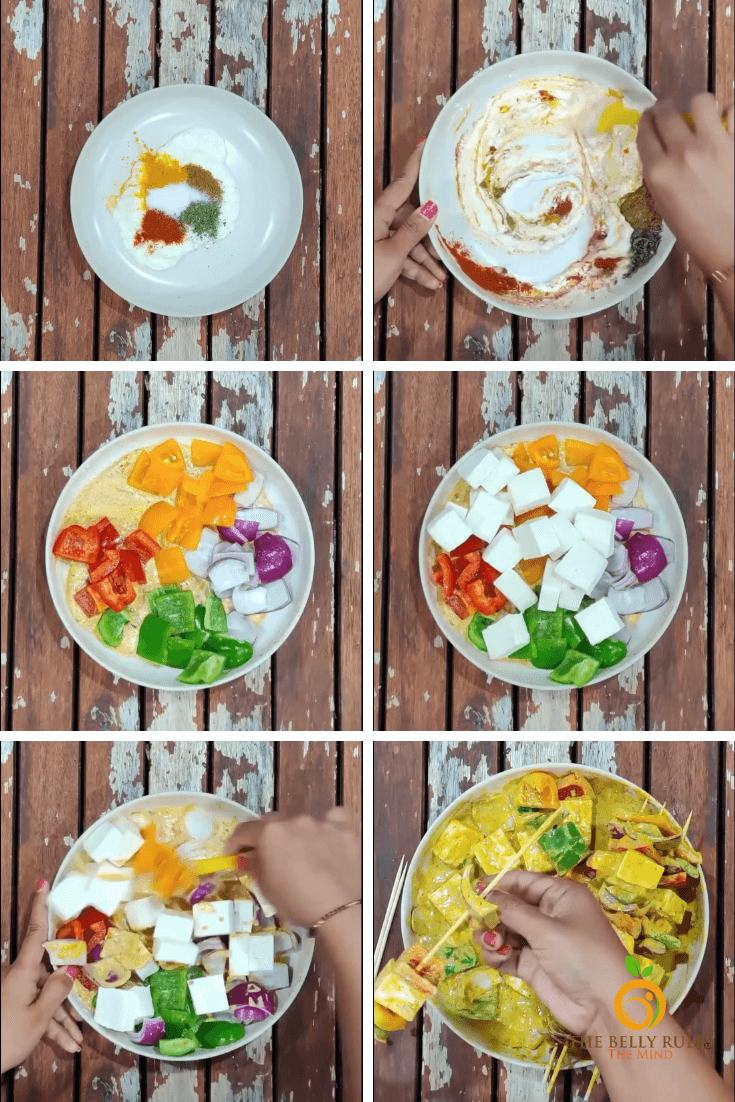 Set the airfryer to 450 degrees and cook it for 7 minutes. After 7 minutes, turn the kabobs and cook for an additional 2-3 minutes at 450. The kabobs are done when charring forms around the edges. 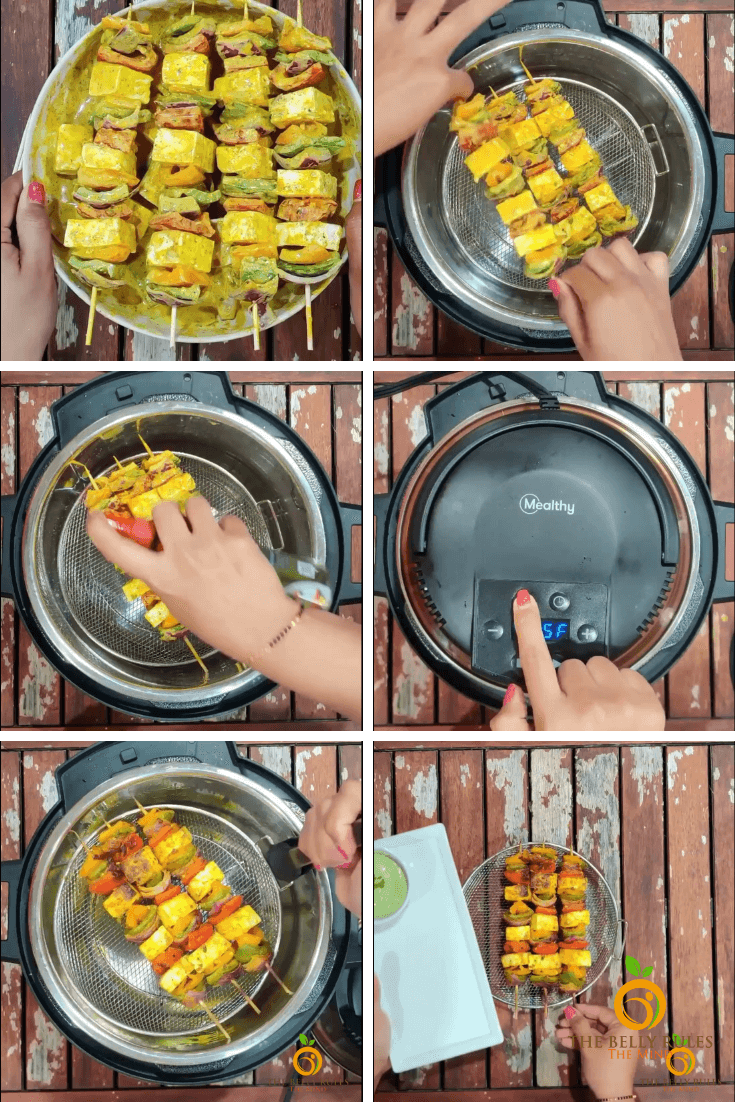 TIPS AND TRICKS OF HOW TO MAKE PANEER TIKKA AT HOME

Here are some tips for making the best tasting tandoori paneer in the air fryer:

HOW DO I KNOW IF PANEER IS PROPERLY COOKED

One of the nice features of an air fryer is that it evenly cooks paneer with no need to worry. If you set your air fryer to 450 degrees you cook it for 7 minutes and then turn it. It will need an additional 2-3 minutes at 450.

The way to tell the paneer is done is to look for charring around the edges. Once it starts to char, it is ready to eat.

Set it to 450 F degrees for 7 minutes. Turn the and set the time for 2 to 3 minutes until paneer pieces look little charred.

HOW CAN I MAKE PANEER TIKKA IN THE OVEN

When you are ready to cook the paneer tikka, preheat the oven to 430 degrees. Make sure it is fully preheated before starting the cooking process.

Cook the paneer tikka for 15 minutes in the oven. Halfway through, flip the skewers. When the timer rings, place the kabobs on the top rack and turn the broiler on. Cook under the broiler for 2-3 minutes or until they start to char.

HOW CAN I MAKE TANDOORI PANEER TIKKA ON THE STOVE TOP

If you want to make paneer tikka on the stove top, you can! Follow the same directions for creating the kabobs and let them marinade for at least 30 minutes before cooking them.

You’ll notice some charring on the paneer, which indicates a side is done cooking. Make sure the skillet or pan is nice and hot before adding the kabobs to help ensure they cook evenly and get charred on each side.

HOW TO MAKE PANEER TIKKA IN THE MICROWAVE

You can make tandoori paneer tika in the microwave, though I would recommend avoiding it if you can. Like the air fryer, a microwave is a faster way of cooking the kabobs, but the paneer tikka won’t get the nice charred flavor from cooking in a traditional tandoor, regular oven, or air fryer.

To use a microwave to make paneer tikka, make the kabobs as you would for the airfryer and place them on a microwave safe plate with a bit of space between them. Once they are ready, microwave the paneer tikka on high for 3 minutes. Keep in mind, this time may vary based on the power of your microwave so you may need to adjust the cooking time for your individual microwave oven.

HOW DO I SERVE PANEER?

Here are some of my favorite ways to serve tandoori paneer tikka:

If you are a fan of healthy eating and have just purchased an instant pot, Try out our 100+Instant Pot Vegetarian Recipes. From Soups to Pasta and from Appetizers to Desserts and everything in between.

If you make this recipe, Don’t forget to come back and leave your feedback and star rating. We would be THRILLED if you would take a pic and tag us on Instagram @dbellyrulesdmind or Facebook @thebellyrulesthemind

How to make Paneer Bhurji - The Belly Rules The Mind

Thanks For Sharing The Very Nice Article. I Will also share with my All friends. Great Article thanks a lot.